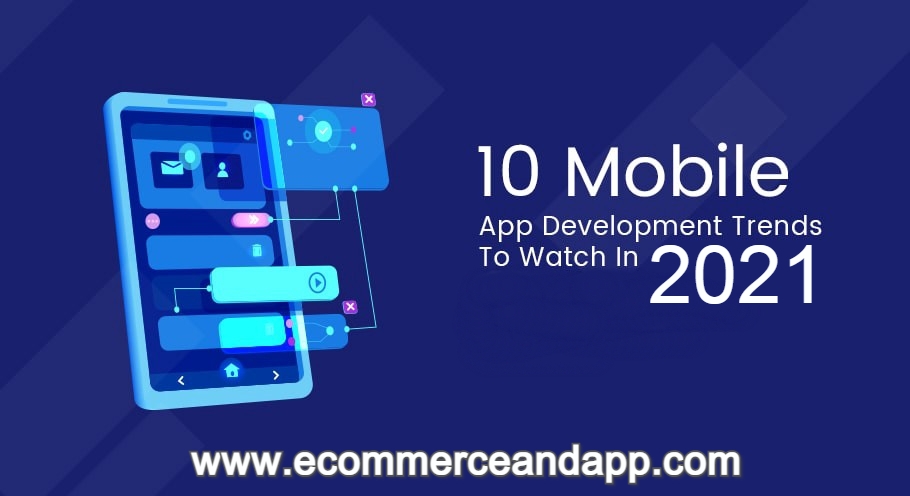 Following are the mobile app development trends in 2021.

Each year, the technology developments drive the business model of what can be done in the growth of mobile applications. If you want to remain up to date with the mobile apps market, look at what to expect next year, and this article will support you!

We consider these to be among the top 10 trending mobile app development solutions in 2021.

For several years, AI has been on our mobile devices and has brought digital assistants to work and to communicate with actual people such as Apple’s Siri. These assistants develop their behaviour upcoming year offering a more detailed and customized experience.

For eg, Google just began a Google Duplex AI project that allows users to ask the Google Assistant of their phone to make phone reservations.

The same happens as chatbots allow organizations to instantly save time and expense for the customer with the most regular interactions. According to Gartner, 85% of consumer transactions are estimated to be managed without a person by the end of 2021.

Also Facebook has announced that businesses in Messenger used more than 300,000 bots last year, and a few months ago the API was launched to allow chatbots in Whatsapp Business.

The technology of augmented reality (AR) is not modern, but is advanced, growing every year to unparalleled levels. Mobile games, particularly Pokémon GO, made it so renowned that thousands of people communicate with non-existent imaginary objects and monsters were projected on the computer with AR. However, implementations in business-critical areas such as defence, safety, hygiene, teaching, industrial repair, etc. for this technology will go much further.

For example, Chinese policemen are beginning to wear intelligent glasses to recognize suspects through systems of facial recognition and even find criminals in the crowd. But it is still being experimented and worked to make use of AR in crime fighting. This is a spanning use of AR in culture, and it will undoubtedly take on an increasingly significant role. According to Statista, for reference, by 2022, about 22,8 million units will be shipped worldwide with AR glasses.

3) The Internet of Things:

Today, virtually every home appliance or device you can thought is being built with internet access . This does not mean testing Red Sox’s last game scores while heating the waffles on the microwave screen but linking to the rest of the home and electronic devices to a single system, that your smartphone can handle.

Jokes aside, the so-called “intelligent homes” are growing and becoming a focus of mobile technology.

It’s because you can’t control your actions better by using your mobile. Imagine getting inside, opening the curtains and setting lights on with just a single touch (or leaving). This is now feasible and is being expanded so that domestic appliances can handle more complex tasks and control them with smartphone applications like Apple “Home”. IDC has reported that, in particular, investments in IoT are projected to reach 1 billion dollars by 2022.

At one time we had to pay in cash for anything. Credit and Debit cards have emerged, so we need not to carry many bills in our pocket. However, the wallet here is a basic denominator. Usually, the stuff in our pockets hasn’t changed until now. Your cell phone will be the pocket of the century, and this future continues to come.

Mobile developers should be prepared to add mobile payment features to their toolbox in this sense and this will help in increasing mobile payment portal industry. Often, as with many other subjects, the associated roles and skills become more and more popular. For eg, in mobile app developers elements such as biometric and user authentication multi-factor should also be considered.

Using your body to prove that you are yourself is a common feature of new mobile devices. Many surveys indicate that over 60% of mobile delivered have consistently increasing fingerprint scanning capacities. Every year, this authentication technology is developed and a quicker and reliable scanner is produced under the monitor.

Smart devices now provide mainstream biometric verification. It is used to log into your bank account or other sensitive digital space, in which your data will be secured. It certainly, like any other smartphone safety measure, has defects, but biometrics combined with classical authentication techniques are the state-of-the-art security of authentication. Mobile developers need to be trained, with their mobile applications, to use technology like FaceID or TouchID.

One of Developers’ primary objectives is to build a simple and user-friendly website which can function well on any smartphone (particularly mobiles). They exit pages that take too long to launch, and the same applies. PWA will implement new approaches to solving an old issue.

Progressive Web applications are web services that serve as mobile native apps for a secure, easy and engaging experience.  The benefit of this technology is a lower production cost relative to a conventional native application, but with closer performance.

The next mobile network generation is knocking on the door and is expected to hit the entire industry in 2021/22. Experimental studies and reports indicate that 5G consumes significantly less electricity than 4G and is quicker, cheaper and more reliable. This is why this brand new technology, like the iPhone 12, makes wireless mobile phones prepared with arrival.

The interruption between phones and tablets fuses into a new type, foldable mobile phones. The first versions like Samsung’s Galaxy Fold and Huawei Mate X have been launched and are now identified last year. DSCC (Display Supply Chain Consultants) has reported that about 1.65 million foldable OLED panels were exported to the world by 2019, hitting 60 million by 2022 which indicates that they are quickly growing.

Right now this is just a thing on the Android side of things, but when designing user interfaces it can have implications. For this sudden change in screen size between the folded and the unfolded models, Moble applications would possibly need to be configured. It would make the already crowded room of multiple screen sizes in the Android environment more complicated and distributed and maybe open up new possibilities for players who automate the generation of user interfaces in apps.

While the hardware Beacons has been in use for a while now, they have still not achieved their maximum capacity. Beacons are instruments with radio signals that smartphones can see and respond to by BLE (Bluetooth Low Energy). For eg, shops may do this by delivering day deals or details to consumers via their app.

That’s not the only thing BLE could work for. We have created a nearby messaging app based on BLE, and it’s also heavily used in mobile payment scenarios. It remains to be seen whether BLE and beacons, in general, will take off in 2021.

This year, the iTunes app store is 12. The industry settled many years ago on two leading smartphone devices, iOS and Android, after an initial ordovician exploration period. These systems have evolved and have in turn made it possible for other architectures to develop over the years, including React-Native, Flutter, Xamarin, and Kotlin.  It is a difficult challenge to handle and operate several code based frameworks with one mobile app. Anyone with a challenge in achieving and retaining similarity in functionality that create a better user interface across platforms knows that.

This is nothing of a slowdown or gradual growth in what is a feasible option to indigenous growth. this is not a breaking pattern. Only by native development will the room with user interfaces be done slowly but gradually. There will certainly still be interactions that can only be accomplished by native mobile development. Nevertheless, experience with a blended application environment should be part of the toolbox of every smartphone app maker. Particularly for the production of MVPs or any early release of products where the product fit wasn’t yet guaranteed. Hybrid architecture frames provide an increasingly realistic path to save time and resources in these circumstances.

The list of trends mentioned in this post is based on research and our mobile team’s opinion, but it’s not extensive. Other trends did not make the cut, such as instant apps and blockchain on mobile, but what do you think? What are your thoughts about this year’s trends? Leave a comment below and tell us!